Definitely this is not a good month for technology as a whole. First Steve Jobs dies and now Dennis Ritchie. Generally I don’t like to write about this kind of stuff, but unlike the first event this loss certainly won’t reach the media and news, so I decided to talk about it. This amazing hacker died at 70 on October 08th. 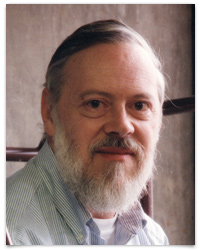 Furthermore, I consider this loss much greater than Steve Jobs, since he wouldn’t have been able to influence anything or anyone if Dennis Ritchie hadn’t existed. Dennis simply was the creator of the C language and co-creator of UNIX (along with Ken Thompson). This definitely brilliant mind was responsible for "defining the templates" for a range of operating systems (often called UNIX-like) among them is GNU/Linux and Mac OS. Strange as it may seem, their creations were essential even for Windows.

Its programming language still lingers as one of the languages with better performance and one of the oldest that still remain in use, second only to COBOL. Many are afraid of his language, but I’m proud to say that I learned to program in that language tough and demanding. Below my tribute to Dennis Ritchie:

Farewell and Thank you very much Dennis Ritchie.